Apparatus «Ekosvet 1» for home use

Medical apparatus «Ekosvet 1» — apparatus for ultraviolet light-pulse therapy is the development of Russian scientists and specialists. Passed many years of clinical trials, approved and recommended for use by Roszdravnadzor, the Russian Academy of Medical Sciences, the Russian Society of Physicians for Restorative Medicine. «Ekosvet 1» will help you improve immunity at home, improve metabolism, slow down the aging of the body, normalize blood pressure, heart and blood vessels, reduce blood viscosity, reduce blood sugar and get rid of many other diseases. Interested in your health and family health?

UFOK is a method of influencing the blood with quanta of light from the ultraviolet part of the spectrum. The method has been used in medicine for over 80 years. In 1928, V. Hancock and E. Knott performed several sessions of extracorporeal UFOK for the first time in a postpartum woman dying from sepsis. The volume of irradiated blood was 100-120 ml. The patient recovered. In the USSR, this method was applied for the first time in Leningrad in 1937 by transfusiologists A.N. Filatov. and Kasumov G.I. In 1979 in Leningrad at the State Optical Institute. S.I. Vavilova Popov Yu.V. in collaboration with L.M. Kukui the device “Isolde” MD – 73, which is used by doctors to this day, was developed and tested.

The biological effect of ultraviolet radiation (UVR) is due to the ability of the molecules of substances that make up the cells of living organisms to absorb radiation quanta and, as a result, to be involved in various photochemical reactions that change their structure and functions. The mechanism of action of irradiated blood on a person is complex and diverse. Until now, there is no unified theory about the effect of UVR on the human body, along with this, scientists have proved that under the influence of UVR, the bactericidal activity of blood and inactivated toxic substances and enzymes is sharply increased by their oxidation. At the second stage, the function of blood cells is activated in the irradiated blood and they release a large number of nonspecific factors of immunity. Under the influence of quantum energy, new surfactants are formed on the surface of erythrocytes, which change the electric charge on the membrane, which reduces the viscosity of the blood and increases its oxygen capacity.

In the therapeutic effect of UFOK, a certain place belongs to the restructuring of the body’s immune system. A good clinical effect of the use of UFOA is associated with the improvement of microcirculation by reducing the viscosity of the blood, as well as with the cleaning of blood vessels from fibrin deposits, which causes an increase in the speed of peripheral blood flow and improves the supply of oxygen to tissues.

Despite the progress achieved in the study of the mechanisms of action of UFOA, research aimed at developing optimal treatment programs for various diseases continues.

The presented data clearly indicate the need for widespread use in everyday clinical practice of an effective and safe UFO method, both in a complex of therapeutic measures for a wide range of diseases and clinical conditions, and independently, especially in case of drug intolerance, inaccessibility or high cost of certain drugs. In this case, one should be guided by the principles: non-invasiveness, sufficient efficiency, safety, a wide range of therapeutic effects, easy to operate, compact. All these requirements are fully met by the unique domestic apparatus UFOK «Ekosvet 1». 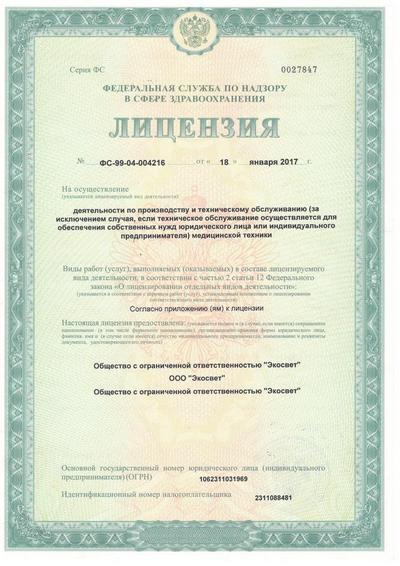 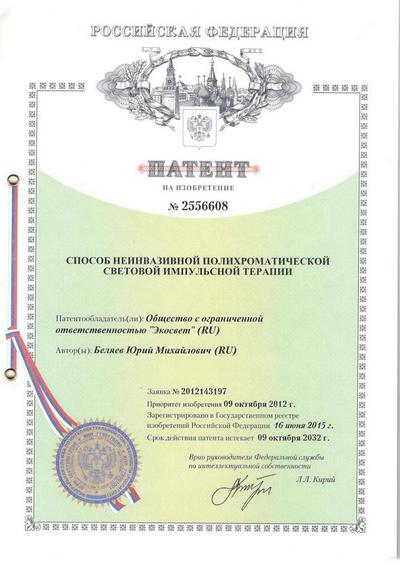 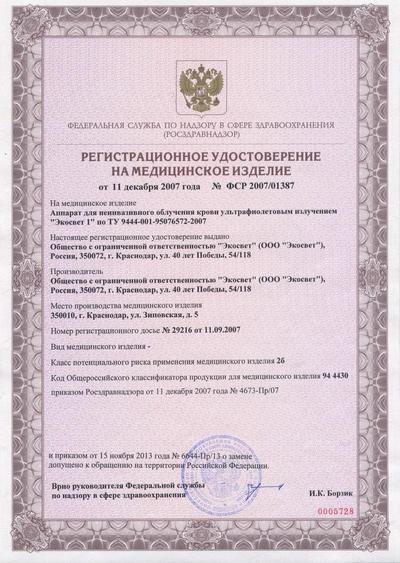 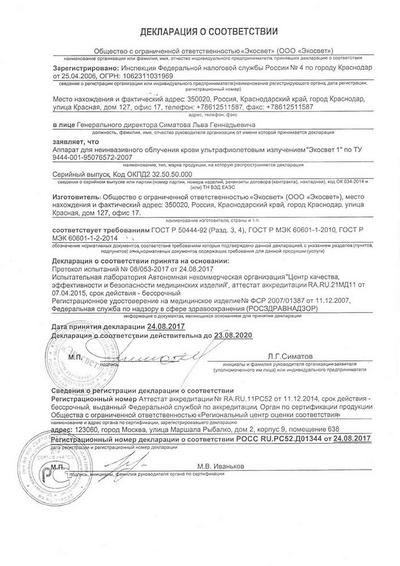